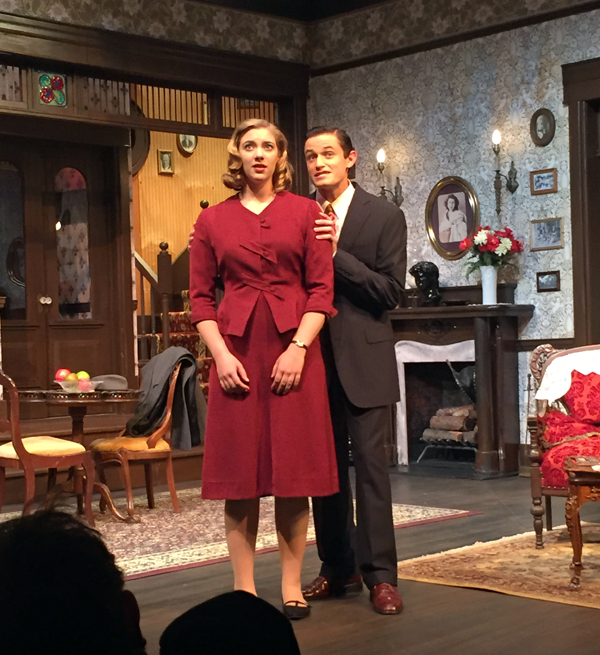 "Stage Door": Rachael Buchanan as Terry Randall looks into her future as an actress.

'We live and breathe theater, and that's what I'm crazy about,' Terry Randall

By Justin Crawford and Anna Cappello

Terry Randall looked intensely at Keith Burgess, the ambitions of her lifelong dream on the stage shining through her sharp, blue eyes.

"I want to play every kind of part I'm not suited for. And what do I get? Ingénues - and very little of that."

"Don't take them," he replied thoughtfully. "Wait till you get what you want."

She smirked to herself, hearing the words that meant so much growing up, but could not fathom living up to. "It's a nice idea, but did you ever hear of this thing called eating?"

He fiddled with his jacket for a bit, then looked up to meet her eyes.

"If you believe in something, you've got to be willing to starve for it."

As a young girl, Rachael Buchanan had an inner passion for the stage. Never was there a defining moment that particularly sparked Buchanan's interest in acting, but an underlying feeling from within that she just couldn't ignore.

"Every time I would watch a movie or see a show, I could see myself up there," she said.

Buchanan was drawn to acting from a young age and has pursued her dreams of being on stage ever since. Now a junior theater performance major at Niagara University, she is one step closer to fulfilling her lifelong acting career.

Buchanan played Terry Randall, the lead role in NU's theater production of "Stage Door," which ran Nov. 3-13. "Stage Door," written by Edna Ferber and George Kaufman, focuses on the trials of the acting profession and the obstacles actors must face in the world of theater.

Premiering for the first time in 1936, this timeless comedy-drama has proven to be as relevant to actors and actresses today as it was back then.

Throughout "Stage Door," Terry faces constant rejection and offers of leaving the theater to go to Hollywood, which has a notorious reputation for ruining acting careers. Despite several setbacks during her early acting career, Terry demonstrates an amazing amount of persistence and sticks true to her goal of becoming a successful theater actress.

"Something I really admire about Terry is her determination," Buchanan said. "No matter how many times she is told 'No,' she never gives up. That is what I want to take away from playing her."

As portrayed by Terry in "Stage Door," succeeding in show business can be a strenuous road. The fear of rejection often causes an aspiring actress to either grow thick skin and pursue her goal no matter the odds, or give up.

As Buchanan put it, "The most difficult part of being an actress is the constant rejection that everyone in this field faces at some point. It's a huge part of performing, and the fact that you will go to hundreds of auditions and not always get cast can be discouraging."

Many aspiring theater performers can attest to the obstacles the characters in the play go through.

"This storyline relates perfectly to an actor's struggle," said Britini D'Angelo, a sophomore theater performance and communications major at Niagara. "Theater majors are a part of a business where only around 3 percent of people are hired. The struggle of finding a job is as prevalent now as it was in the show."

"Stage Door" not only touches on the obstacles those in the theater face, but also the challenges that people in every field of work go through. The play raises important points about anyone fulfilling their own dreams.

Peter Raimondo, a senior at Niagara University who played the role of Mr. David Kingsley in "Stage Door," stated how the difficult decisions the characters must make regarding their future can pertain to anyone.

"The question is: Do you pursue your dream even when it's tough, or do you go for something that's going to make you money?" he said.

Terry faced this dilemma countless times throughout the play and ultimately never settled for anything that wouldn't make her happy. If this meant starving or living off a very low income, she made that sacrifice so, in the end, her acting dream could come true.

When Buchanan started the rehearsal process for Niagara's production of "Stage Door," little would she know how much of herself she would see in her character.

"Terry is similar to me in a lot of different ways," she said. "The struggle of being turned down and constantly auditioning without success or recognition all the time is very relatable." 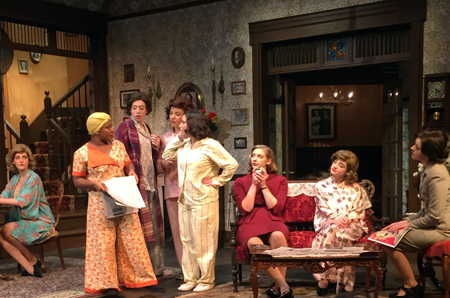 Members of the cast commented on how impressed they were with how well Buchanan connected with her character.

"It's cool to see how much an actor can relate to the character that they are casted in a production," said Mariangela Mercurio, a sophomore theater performance major who was also in the production. "Rachael definitely connected with her character on an emotional level, which is one of the reasons she was able to give a fantastic performance on stage."

D'Angelo agreed, and said Buchanan truly embodied the character of Terry Randall in the show.

"Throughout the entire process, it was inspiring to watch someone dive into their character to such a large extent. Rachael really connected to Terry and it was amazing to watch her character transform as the rehearsal process progressed," she said. "This role truly showcased how talented she is as a performer."

Just as Terry faced the unknown of what her future held, Buchanan also faces the unwritten acting career before her. With all the potential rough patches and obstacles, there's a lot for the aspiring actress to be optimistic about.

"Over the next few years, my career will lead to a lot of auditioning and, hopefully, a lot of performing," Buchanan said. "My dream would be to work on a national tour across the country with a show, or work in Disney World as a character performer. I guess it's just trying to get my foot in the door somewhere!"

There is no telling what the future holds for aspiring theater performers, however, with a relentless passion and positive attitude, anything is possible. As they wrestle with these questions, there is no doubt their futures are promising.