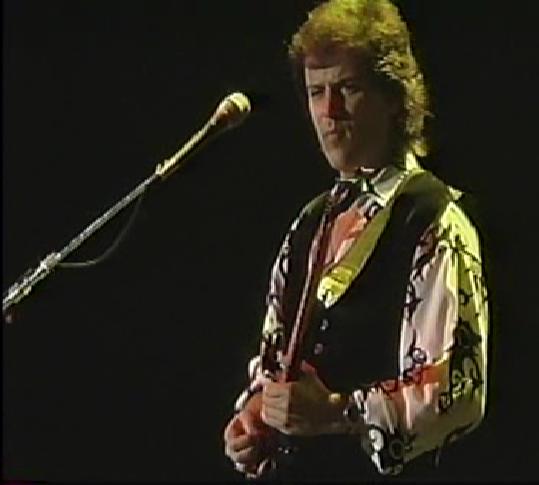 Trevor Rabin on stage with Yes. (Photo by Prog-Ress, used under terms of Creative Commons)

Guitarist Trevor Rabin is best known for his tenure in Yes during what was the band's height of popularity. The Rabin-penned song "Owner of a Lonely Heart" remains the group's only No. 1 single, and helped make Rabin's debut album with Yes, "90125," its best-selling album.

Rabin will be coming to Buffalo on Wednesday, Nov. 2, for an "Evening of Yes music with ARW," featuring longtime former Yes vocalist Jon Anderson and former Yes keyboardist Rick Wakeman. It is the first time Rabin has toured since 1994.

Like many progressive rock bands of the era, lineup changes were constant, and the "90125"-era Yes lineup lasted from 1983-94, only producing three albums under the Yes moniker.

"There was a lot of acrimony at the time between Jon and I, and Jon and Chris, and me and Chris at the time. I just decided that I needed to step away. I wanted to work with symphony orchestras and I was very lucky," Rabin said during a recent phone interview.

In 1996, Rabin had a chance to work with a symphony orchestra, scoring the film "The Glimmer Man," starring Steven Seagal. That began a string of more than 50 film scores, which include "Remember the Titans," "Con Air," "National Treasure" and "Jack Frost."

"It's funny, because people were saying it had been 15 years since I made an album, but I have been doing score albums every year," Rabin noted.

In the middle of the "90125" period, Yes released "Union," an album that brought together the "Fragile"- and "90125"-eras lineup of Yes. The album featured eight members, but the entire lineup did not perform together in the studio.

The subsequent tour for "Union" was the first time Rabin worked with keyboardist Wakeman.

"After about a week of touring on the 'Union' tour, Rick and I said to each other that, once the tour was over, we needed to do something together," Rabin said. "I had no intentions of being on the road again. I have done 50 movies over the last 20 years, so I have been busy. There was not much thought about going on the road; it just took this long for it to happen."

Last year, longtime Yes bassist Chris Squire passed away. Squire was the only person to appear on all Yes albums, and founded the band with Anderson back in 1969.

"There were a number of times Chris talked to me about rejoining Yes, but I really enjoyed the film thing and, without Jon and Rick there, I really had no interest, anyway," Rabin said. "Outside of his wife, I think I was one of the last people to talk to him. It was a shock. He told me days before he died that he looked forward to beating the disease and getting back out on the road. I had a ticket booked to see him, but he was not allowed to see anyone because of the fear of infection.

"I spoke to him very often, and held the L.A memorial at my house. It was very moving. I have to say the passing of Chris was the catalyst for us getting ARW together. Rick and I spoke and we just said we need to do this."

When the group decided to tour, members needed to decide what material they would perform. All three members have had successful solo careers and appeared on a multitude of Yes albums.

"We all put down songs we wanted to perform, but if we did them all, the set would be six hours, so that didn't work," Rabin said. "The original idea was to have new music and then go on the road, but the road just swept us away."

"The ultimate goal is to do an album. There is talk of doing a live album, but we want to get some new music out there," Rabin said.

The band members also discussed the possibility of releasing individual songs ahead of a full album.

"I will be working hard, because I intend to keep doing films and keep working with ARW," Rabin said. "And I decided after I did the instrumental album ("Jacaranda" in 2012), which was the most joyous experience I had as a musician. I did not negotiate an album deal until after the album was completed, and I think it is my best as far as my playing. I am now working very hard to get an album together with ARW. We have about half the material ready."

For the moment, the band members are thoroughly enjoying their time onstage together.

"I hate to sound cliché, but there is a vibe and a Zen feeling onstage," Rabin said. "Time just stands still, and Jon has been quite incredible - his energy is amazing."

Rounding out ARW is drummer Lou Molino III, who has worked extensively with Rabin, appearing on the stellar concert album "Live in L.A," and "Jacaranda." On bass is Lee Pomeroy, who has toured with Jeff Lynne's ELO in recent years.

(Photo by Prog-Ress, used under terms of Creative Commons)