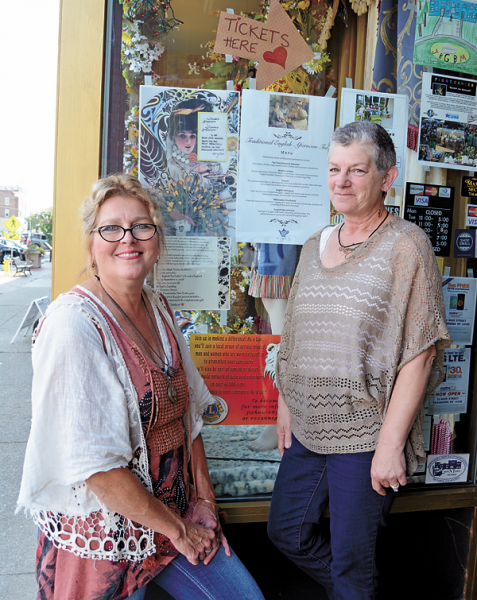 Holly Rankie, owner of Hip Gypsy on North Tonawanda's Webster Street, is getting ready to throw her friend and fellow-business owner Michele Krienbuhl a tea party to say "thank you" for her contributions to helping those affected by cancer.

Krienbuhl, herself, has cancer and, beginning many years before her diagnosis, donated her time and portions of her sales from her business, Michele's Motif, to Roswell Park Cancer Institute.

"Basically, she's always been there for everyone who's fighting the battle of cancer," Rankie said. "And with her being diagnosed eight years ago, I think it's time that we all kind of step up and do something for her."

"Michele's High Tea for the BIG C," featuring authentic British cuisine, music, prizes and a waterside view, will be held from 11:30 a.m. until 2 p.m. Sunday, Sept. 11, at Michael's Landing, 377 Sweeney St., North Tonawanda. Donations generated from the event will go toward a cruise trip (hence, the "BIG C"), for Krienbuhl and her daughter.

Rankie said both she and Michele are "girly" and thought a tea party-type event would be something enjoyable.

"She's never been to a high tea," Rankie said. "She's thrilled about it. It's a party for her."

The tea will be put on by the English Tea Ladies: Lauren and Libbey.

"These ladies that are serving this tea are from London, England," Rankie said. "So this is an authentic British tea." 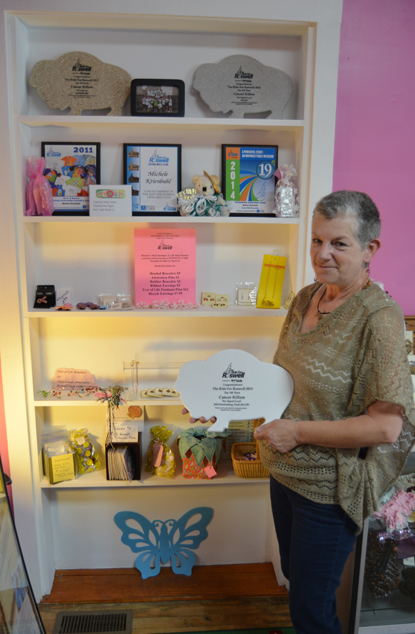 Michele Krienbuhl stands by shelves of merchandise at her business, Michele's Motif, where 100 percent of the sale is donated to the Roswell Park Cancer Institute.

The English Tea Ladies' Facebook page states the mission is "to provide quality products and an authentic English tea experience. To consistently provide our customers with impeccable service, demonstrating warmth, graciousness and professionalism in everything we do. To keep our concept fresh, exciting and in line with our customer's needs."

Rankie said this will be the biggest tea The English Tea Ladies have ever put on. However, they told her they have held events at Michael's Landing before and enjoyed it.

At the venue, "We've got the ambiance of the dock and the boats," Rankie said.

Besides a variety of English tea, the menu will feature lemonade; a selection of tea time sandwiches (including coronation chicken, egg salad and cream cheese and cucumber); quiche Lorraine, made with a pastry with bacon, mushrooms, onion, cherry tomatoes and English cheddar cheese, stuffed with a creamy egg filling; buttermilk scones filled with Devonshire cream and strawberry preserves; English meringues topped with lemon curd and "Millionaire's Shortbread" with homemade caramel and chocolate topping.

Guests will dine and sip at tables set with linens and fine china, while soloist Michael Nugent of Mike Nugent Entertainment will serve as the event's master of ceremonies and provide live entertainment, singing classic tunes by artists such as Frank Sinatra, Elvis Presley, Bobby Darin and Tony Bennett.

A professional photographer will be on site, ready to snap photos of those who wish to document their time at the event.

Everyone will receive a complimentary gift. Featured will be door prizes and a basket auction. Each basket has a value of at least $100.

Other prizes will include a refrigerator donated by A-1 Appliances, a golf package and a Michael Kors bag. Overall, all prizes have been donated by local businesses and citizens. There will even be a basket made up of contributions and donations from various businesses on Webster Street.

Tickets for the event are available for a $45 donation (prepay only). Everyone is welcome. For tickets, contact Rankie at Hip Gypsy before Sept. 7, or while supplies last, at 260-1313, or stop by the store at 78 Webster St.

With donations from tickets and the basket auction, as well as good will donations, Rankie said her goal is to raise between $2,000 and $3,000.

"Holly is just the sweetest, sweetest, person," Krienbuhl said. "She's doing (this) for me, so that just goes to show what a caring person she is."

Rankie and Krienbuhl have become good friends over the past five years.

Rankie came up with the idea for the event after Krienbuhl mentioned during one of their conversations that she hoped, one day, she and her daughter could go on a cruise together.

Keeping this in mind, Rankie decided to find a fun way to help generate donations to make it happen.

For the past 17 years, Krienbuhl has participated in the Ride for Roswell and, through her business, donates a percentage of all her sales to Roswell to support research and programming.

"I have the most generous customers in the whole wide world," Krienbuhl said.

"I know I do have a following of customers that shop here because they feel it's their way of giving back. ... As much as people say I'm giving, I'm really not. They (the customers) are coming in and giving. ... I think it's just full circle."

She added, "There's a lot of people out there that are battling this disease or have loved ones that (are), and (they) come in and it's their way of saying, 'I want to help.'

"People feel good when they can give for a cause they believe in and cancer touches way too many people. You can't live without being touched by this somewhere."

Krienbuhl has display shelves in her store that showcase select items where 100 percent of the sales go to Roswell. She handcrafts some of these items, while others are donated by other artisans.

Her plaques from raising funds for Ride for Roswell over the years are on display among these shelves.

Krienbuhl said, this year, around $4.5 million was raised from the Ride for Roswell.

"It is amazing, because I'm just a drop in a big bucket," she said.

Holly Rankie and Michele Krienbuhl pose by signage promoting "Michele's High Tea for the BIG C," in the window of Hip Gypsy on Webster Street in North Tonawanda, where tickets for the event can be obtained. 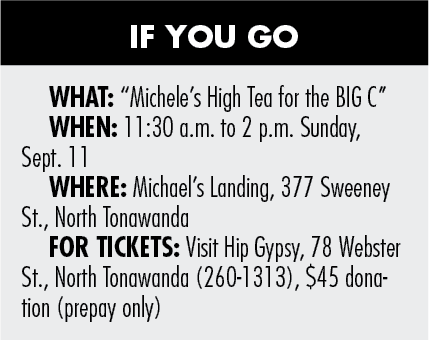