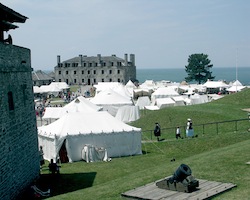 Old Fort Niagara will hold its 35th annual "French and Indian War Encampment" July 4-6. The event is the largest re-enactment of the year at the fort and features hundreds of authentically clad French, British and Native American participants.

Recreating the historic siege of Fort Niagara in 1759, the event features large-scale battle re-enactments at 2 p.m. each day, expansive living history camps, period music, hands-on activities for children, and dozens of 18th century artisans and merchants. New this year will be a woodland re-enactment of the crucial Battle of La Belle Famille, and a recreation of the funeral of Gen. John Prideaux, the British commander who was killed during the siege.

The event begins on the morning of Friday, July 4, when all of the troops and Native warriors assemble for a grand parade and trooping of the colors. This is followed by a French and Indian attack on a frontier settlement. Next, young people will have a chance to "enlist" in the New York Provincial forces to help the British capture Fort Niagara from the French. At noon, the British Indian agent, Sir William Johnson, will council with leaders of the Six Nations to secure their support for an attack on Fort Niagara. At 2 p.m., both sides will mass their troops for a battle re-enactment that recreates a British assault on Fort Niagara's outer works. This will be followed at 3 p.m. by a French artillery bombardment.

The event's second day will open with a Native American lacrosse game, followed by a dramatic recreation of a council between Native leaders and the fort's commander, in which the French persuade the Natives to withdraw from the British side. At noon, visitors will learn about the nuts and bolts of 18th century siege warfare as British engineers demonstrate how a besieging army dug its way toward the fort's outer walls. This will be followed by an artillery demonstration involving multiple guns, howitzers and mortars. At 2 p.m., the French will launch a counterattack hoping to drive the British Army away from the fort. Following the battle, re-enactors will present two programs: "Kids Drill," a chance for young people to enlist in the fort's garrison; and "18th Century Games." At 3:30 p.m., French artillery will once again open fire, portraying the fort defenders' increasingly desperate situation.

On Sunday, July 6, visitors will witness the fort's capture much as it happened in late July 1759. Activities begin at 11 a.m. with a re-enactment of the Battle of La Belle Famille, a crucial engagement that determined the fate of the fort. A new venue for this event will more closely recreate the terrain in which the original battle occurred 255 years ago. Visitors are urged to arrive at the fort by 10 a.m. to catch the shuttles to the nearby battle site.

Visitors will also witness artillery demonstrations and military music throughout the day. At 2 p.m., the British make their final assault on the fort, this time capturing the outer works and forcing the French to surrender. Following surrender ceremonies and the exit of the French garrison, the British inter their commander, who was killed during the siege.

The French and Indian War was fought between 1754 and 1760, two decades before the American Revolution. Under the terms of the treaty that ended the war, Britain took control of Canada and Great Lakes region. The war's cost led to new taxes on the King's American subjects, which spawned political unrest in the 13 colonies. Colonists such as George Washington gained their first military experience during the conflict - experience that would serve them well during the subsequent War for American Independence.

Over its long history, Old Fort Niagara's "French and Indian War Encampment" has become a July 4 tradition for many area residents and visitors to the region. The event dramatically portrays an important episode in early American history that helped shape the future histories of the U.S. and Canada.

Old Fort Niagara is located in Youngstown, 14 miles north of Niagara Falls via the Robert Moses Parkway North. The fort opens at 9 a.m. daily. Old Fort Niagara is a National Landmark and State Historic Site operated by the Old Fort Niagara Association (a not-for-profit organization) in cooperation with the New York State Office of Parks, Recreation and Historic Preservation.