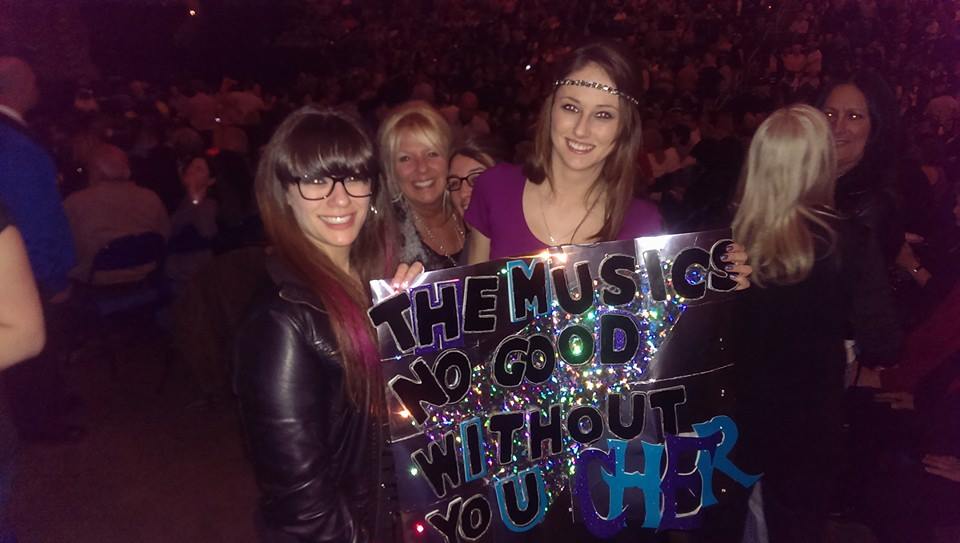 Cher fans, including the author, at her Buffalo concert.

This year marks 50 years of entertaining for Cher. Buffalo was lucky enough to make the list of cities as she embarked on her final farewell tour. The six months of anticipation since tickets went on sale was finally released Wednesday night, April 23, as Cher took to the stage at the First Niagara Center.

Cher's last time performing in Buffalo was 2003 on her first farewell tour, "Living Proof," at the previously named HSBC Arena. This time, the pop star drew a nearly sellout crowd of fans of all ages. The line outside of the First Niagara Center prior to doors opening was woven down the sidewalk and around the parking garage filled with excited fans in flamboyant outfits.

Starting time of the show was pushed behind schedule due to getting the audience in and some technical difficulties with opening act Cyndi Lauper's set. Buffalo was Lauper's first show of the "Dressed to Kill" tour with Cher.

When the lights began to dim, fans roared with excitement as Lauper entered the stage from the left side of the crowd singing her 1984 hit song "She Bop." During her 45 minute-set, she sang nine songs, many of which came from her "She's So Unusual" album, which just hit its 30-year anniversary.

Lauper opened for Cher during her last farewell tour, so it was no surprise she would please and amp up the crowd. Fans were on their feet as they sang along with many of Lauper's hits. She slowed the energetic performance with the closing song "True Colors."

Minutes after exiting the stage, Cher's voice boomed over the loud speaker asking the crowd if they liked Lauper's performance - if she got them excited. Before the curtain dropped and the music began, she ended the monologue with poking fun at both her and her fans' ages.

"Did everyone remember to take their heart medicine, 'cause I'm on my way out," Cher said.

Cher descended on a pedestal to her new song "Woman's World" sporting an Egyptian-like sequined outfit matched with a feather headdress. Then she went right into the '90s disco-inspired hit "Strong Enough."

Following the opening songs, Cher took a break to talk to and welcome her fans. She stated she was nervous because her voice was not at its best. She countered her own nerves by convincing herself of what her audiences wanted.

"They don't care; they just want me to come out in crazy outfits, sing and be fabulous," Cher said, and to which the crowd replied in assurance with applause.

Following that, she said, "This really is my last farewell tour," to which fans let out a sigh of disappointment. Surprisingly, Cher gave the crowd a big wink after that statement. As she went on for a few more minutes talking to her fans, she ended by again assuring the crowd this is last time on the road, to which she turned to exit the stage where the crowd saw her fingers crossed behind her back.

The tour's program book also included a note from Cher again hinting at this not being farewell.

"Last, but not least..., I want you to be at my 'honest to goodness no doubt about it, one and only, I'm not kidding, you HAVE seen the last of me (most likely) farewell, farewell tour," it read.

It's difficult to determine if that was just Cher's sense of humor, or if there is a possibility that she will keep going. Fans surely hope it's the latter.

This tour included something very special to Cher that she said she has always wanted to do, but could never emotionally do it. She said since this really is the last time, she decided to do it. It was a tribute to Sonny Bono, her former husband - the man who broke her out of her shell and brought her into music.

A large screen came down where Sonny appeared from old video clips and a '70s-dressed Cher faced the screen and sang the couples' hit "I Got You Babe." There were not many dry eyes in the audience.

The show went on with a total of 19 songs, both from previous albums and Cher's newest, 25th studio album, "Closer to the Truth." The show was complete with multiple sets and 11 outfit changes. Cher rocked the classic "Turn Back Time" cutout leotard, sarcastically commenting to the crowd, "Yes, I can still fit in the 'Turn Back Time' costume."

Cher's final two songs were fan favorite "Believe" and new song "I Hope You Find It." There was something very special about the way Cher ended her show. She was hoisted up onto a moving platform, which brought her out over the floor crowd and around to the upper sections. Not only did Cher choose to keep ticket prices low and affordable for fans, but she also gave all sections of seating a chance to see her up close.

'80s music fan and first time Cher goer Haley Bissonnette was stunned by the intricacy of the concert, noting it was more than a concert - it was an entire show.

"KISS and Def Leppard charge around $750 for seats like these (18th row floor seats), and they just sing and put fire on the stage, I've never seen anything like this," she said."

Being a diehard fan myself, I was nothing less than amazed with the outcome of the show. I have seen Cher four times now, but this time was by far the best. Partially because when I first saw her I was only 8 and now that I am 21, I can appreciate the hard work and true talent Cher and her tour crew has.

Although I came short of my goal of meeting her, I did get noticed with a poster I made. I saw her glance my way during "Believe," and I tweeted after asking if she saw my light-up poster, to which she replied, "saw you" accompanied with a rose emoticon. With 2.1 million followers, I can say I am halfway to accomplishing my goal (and for even that I am so grateful).

Clips were played of moments from Cher's past throughout her show. One that stuck out to me was her 1988 acceptance speech for her Oscar in her role in "Moonstruck."

"I don't think this means that I am somebody, but I guess I'm on my way," she said.

Well, Cher, now you are far more than on your way. You're there and continue to be somebody as a true idol and inspiration for many fans.