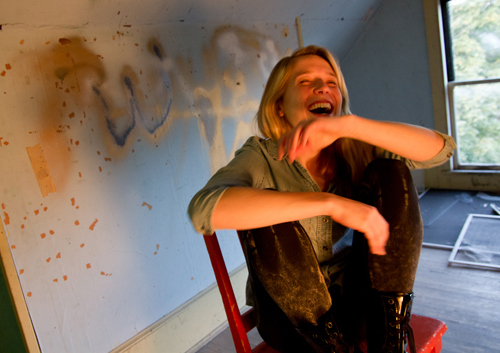 Wolf a finalist in Artvoice Boom, Round 2

Buffalo musician Chelsea O'Donnell, aka Wolf, will be among four area finalists participating in round two of the Artvoice Boom competition, Friday, Feb. 28, at 10 p.m., at Nietzsche's, 248 Allen St., Buffalo.

Wolf, who hails from a family of musicians, first began writing music, poetry and lyrics at age 12. Her talents have continued to bloom and grow over the course of a decade. At age 17, the artist developed a unique musical identity and an inviting stage presence that has distinguished her as a captivating and compelling artist.

She has played solo at a number of local venues, including Nietzsche's, Sweet_ness 7 Café, Taste, SpOt Coffee, the Gypsy Parlor, the Forvm and PeopleArt. She enjoys playing most for audiences who are receptive and engaging. A typical Wolf show includes passionate tunes, laughing and even some unique howling.

Her musical sound has its focus on alternative acoustic-rock with grunge and punk sensibility. Wolf's latest release, the "Gold and Dirt" EP, offers an impressively full sound, but also boasts the same closeness and intimacy as her live shows, during which she is consistently enthusiastic, amicable and appreciative. In the past, she has received comparisons to such artists as Alanis Morissette, Say Anything, Edie Brickell and the New Bohemians, Avril Lavigne, Hayley Williams and Grace Potter.

Regardless of a listener's individual musical taste, Wolf's on-stage performances are one to enjoy.

With the release of "Gold & Dirt," Wolf hopes to broaden her fan base and become further integrated into the same local music scene that she has grown to admire.

Visitors to the Artvoice Boom Competition will have the opportunity to participate in judging. Ballots will be provided at the door to attendees will then be able to cast a vote for their favorite. The winning performer that night will move on to the grand finale show in June and compete for a chance to win $5,000.

For more on Wolf, visit www.musicbywolf.com or check her out on Facebook.