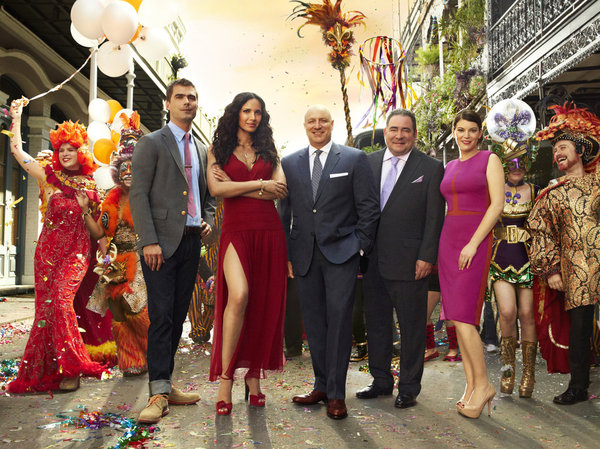 Bravo Media's Emmy and James Beard Award-winning series "Top Chef" is back and heads to New Orleans for season 11 on Wednesday, Oct. 2, at 10 p.m. This season kicks off with a new pre-premiere digital video series, "Padma's Picks," sponsored by Cigna and available on BravoTV.com (http://www.BravoTV.com), beginning Wednesday, Aug. 14.

"Padma's Picks" gives one of New Orleans' most talented chefs the opportunity to cook their way on to the actual show. Host and judge Lakshmi visits some of The Big Easy's most celebrated establishments to find 10 of the best and brightest chefs from New Orleans. These chefs will then battle head-to-head to make it to the "Cigna GO YOU Challenge" finale of "Padma's Picks," with the ultimate winner earning a coveted spot on this season's cast.

For a sneak peek at the new season, go to http://www.bravotv.com/top-chef/season-11/videos/top-chef-comes-to-new-orleans.

This season will up the ante against the backdrop of the gastronomically diverse city of New Orleans - and the chefs will be tasked with serving up food for top entertainers, culinary stars and celebrity guest judges, including Jon Favreau, Lea Michele, Anthony Mackie, Questlove, Leah Chase, Paul Prudhomme, Jacques Pepin, David Chang, John Besh, and Eddie Huang, as well as local legends Kermit Ruffins and Dr. John.

The chef'testants will bring out their knives as they battle it out for $125,000, furnished by Healthy Choice, a feature in Food & Wine magazine, a showcase at the Annual Food & Wine Classic in Aspen and the title of "Top Chef."

Following are the first six chefs from the northeast who will compete for the title of "Top Chef." The remaining chef'testants will be revealed by region each day this week on Bravotv.com (http://www.bravotv.com/) through Wednesday, Aug. 14, when fans can visit the site to check out all six episodes of "Padma's Picks" and find out who the final chef'testant will be.

Additionally, "Top Chef: Last Chance Kitchen," the Emmy-nominated digital video series sponsored by Toyota and hosted by Colicchio, returns for its third season. Each week, two eliminated chef'testants face-off to compete for the ultimate prize: redemption and a spot in the "Top Chef" finale.

Fans can follow the "Top Chef: Last Chance Kitchen" challenges on BravoTV.com (http://www.BravoTV.com), as well as join in the social conversation and see what the chef'testants have to say during the competition by following @bravotopchef on Twitter or liking the "Top Chef" Facebook fan page.