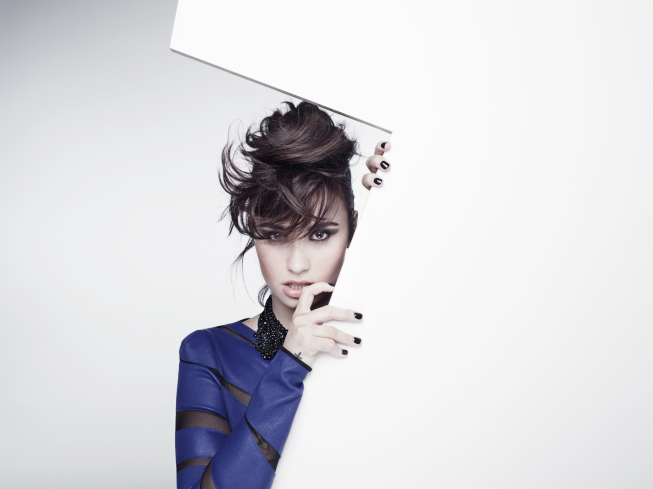 "The X Factor": Platinum-selling global sensation Demi Lovato will return to the judge's panel for season three of "The X Factor" airing on FOX. (FOX photo)

Chart-dominating singer, songwriter and actress Demi Lovato is ready to take Simon on for round two! Lovato jumps back in her seat as the fan-favorite judge on "The X Factor," the hit singing competition series that launches its third season this fall on FOX.

Last season, Lovato, the youngest judge and mentor to the Young Adults category, brought a fresh perspective to the panel and won over legions of "The X Factor" fans with her playful banter, spot-on critiques and genuine encouragement. Lovato returns to the show amid the breakout success of her latest single, "Heart Attack," which recently achieved gold status in the U.S. within just four weeks of its release.

"I couldn't be happier that Demi wants to come back this year," said judge and producer Simon Cowell. "She's a superstar in her own right, and was a fantastic mentor last year. Even though she can be really, really annoying - I truly enjoyed working with her and so did the artists. I'm especially pleased she's back, even during her world tour!"

"I am so excited to return as a judge and mentor on 'The X Factor,' " Lovato said. "Last season was an unbelievable experience and I really enjoyed developing personal relationships with the contestants and the panel. I look forward to taking my previous experience and applying it to make this season even better!"

Lovato has had a phenomenal start to 2013, spurred by the release of "Heart Attack," her first single off of her untitled, upcoming fourth album.The single recently debuted at No. 1 on the iTunes chart in 18 countries (including the U.S.) and No. 12 on the Billboard Hot 100 chart (the second-best Billboard debut of the year). The single became the most-added song on Top 40 Radio in the U.S. the week it premiered, and is currently being played on more than 190 radio stations. To date, there have been more than 20 worldwide Twitter trends for "Heart Attack." The song was produced by The Suspex and co-written by Lovato.

"Give Your Heart a Break," Lovato's second and final single off of her third studio album, "Unbroken" (2011), received critical acclaim from contemporary music critics, who praised the production, as well as Lovato's vocals. "Give Your Heart a Break" spent 32 weeks on the Hot 100 in 2012 and reached No. 1 on the Billboard Pop Songs chart. The song also reached No. 1 status at both Mediabase and Broadcast Data Systems in the Top 40 format. The first single off of Unbroken, "Skyscraper," debuted at No. 1 on the iTunes chart, No. 2 on the Billboard Hot Digital Singles chart and No. 10 on the Billboard Hot 100."Skyscraper" has sold more than 1,800,000 digital copies, and was officially certified platinum in the U.S.

Last year, Tate Stevens was crowned "The X Factor" season two winner and was awarded a recording contract, as well as production and creative support to develop, create, record and shoot his first original track and music video. Tate's video debuted as a Pepsi commercial during the live telecast of the 55th Annual Grammy Awards, and he recently released his first single, "Power of a Love Song." His self-titled debut album will be released on April 23.

Open auditions for Season Three of "The X Factor" continue in New Orleans on April 14, followed by Long Island on April 25 and Denver on May 14. For details, visit www.TheXFactorUSA.com.