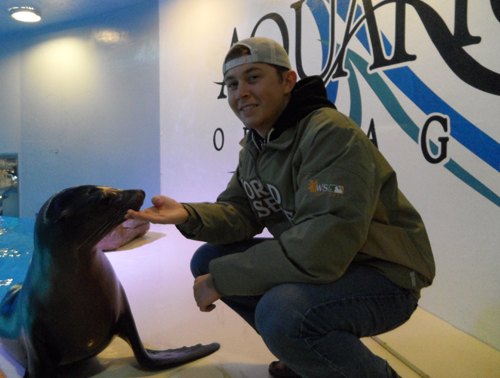 Scotty McCreery is shown on stage at the Aquarium of Niagara with "Arie." (photo by Jennifer Humphrey)

Country music singer Scotty McCreery got up close and personal with some of the Aquarium of Niagara's biggest stars on Friday, Feb. 15. McCreery was in town for a performance at the Rapids Theater, which marked the second stop on his Weekend Road Trip tour.

Just after the 1 p.m. sea lion show, McCreery, his band, management and family arrived on site at the Aquarium of Niagara. The group was greeted by AON personnel, and split into smaller groups to enjoy a VIP experience like never before.

McCreery's first encounter was on stage with "Arie," a 4-year-old female California sea lion. After having the opportunity to interact and toss a few fish, McCreery made his way to the second part of his visit. The second encounter was with "Opus," a Humboldt penguin who was hatched at the Aquarium of Niagara in 1988.

McCreery won the 10th season of "American Idol" in 2011 and, with his first studio album, made history as the youngest singer to debut at No. 1 on the Billboard Top 200 chart.