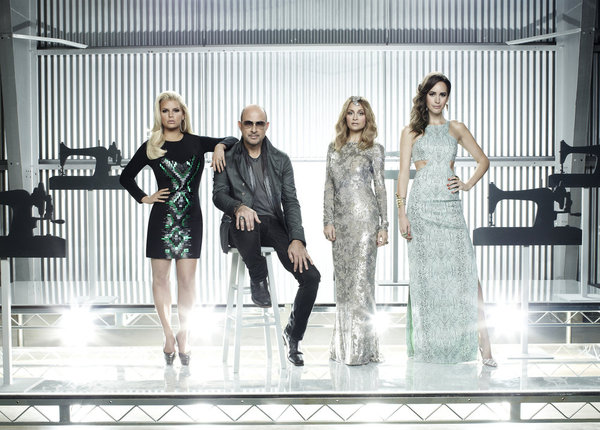 Impressive designers from around the country - including a team of two - will vie for the multimillion dollar prize to launch original fashion lines in Macy's, Saks Fifth Avenue and Express

NBC's reality competition series "Fashion Star" will premiere its second season on Friday, March 8 (8 p.m.). This season, 13 talented designers from around the country, including a team of two competing together, will vie for the multimillion dollar prize of launching a clothing line in Macy's, Saks Fifth Avenue and Express. As previously announced, celebrity mentors Jessica Simpson, Nicole Richie and John Varvatos return to the show and Louise Roe joins this season as host.

Additional information on the designers follows below.

When it returns to NBC in March, "Fashion Star" will resume its search for the next big brand in fashion. Each week, the show will feature exhilarating fashion shows built around a weekly challenge that is designed to further develop and expand the designers' brands. Celebrity mentors Simpson, Richie and Varvatos will guide their teams through the weekly challenges - giving them a chance to win the multimillion dollar prize of launching their collections in three of America's largest retailers. During each episode, viewers will have the chance to immediately purchase the winning designs showcased on the episode that week. What viewers see on TV that night will be available online and in select stores immediately after the program.

The contestants in this season's "Fashion Star" are:

David Appel - The Los Angeles-based designer has worked in the fashion industry for 12 years. His men's contemporary sportswear line Cohesive has been sold all over the country, including Bloomingdales, Nordstrom, Kitson, Gilt, Planet Blue, Atrium and Neiman Marcus LC.

Silvia Arguello - Currently based in Milan, Arguello began her fashion career at Emanuel Ungaro in Paris shortly after graduating from Texas A&M. In 2008, she created the fashion line Rosa Clandestino, which has sold in boutiques around the world, including Fred Segal Couture in Santa Monica. In 2010, she was chosen by Vogue Italia as one of seven designers to watch in the fashion industry.

Hunter Bell - Originally from Florence, S.C., Bell is currently based in New York City. She is co-founder/designer of the brand Hunter Dixon, a contemporary women's fashion line, which has been carried in more than 150 boutiques nationwide.

Priscilla Barroso - Barroso is an Austin, Texas-based fashion designer for Crowned Bird, a French retro-inspired women's apparel collection. She began her career as a custom tailor at Al's Attire atelier in San Francisco. She is a fashion design graduate of the Fashion Institute of Design and Merchandising and has been recognized for her eclectic vintage styling and emerging talents in the indie fashion industry.

Johana Hernandez - The Los Angeles-based fashion designer was raised in the garment industry while her parents worked in sweatshops. Despite her humble beginnings, Hernandez achieved success at the young age of 19, when she started designing for national brands. She has designed collections for Seven7 Jeans, Isaac Mizrahi, Eli Tahari Jeans and many more. Her collections for men and women, including plus size, are available at mass retailers including Macy's, Bloomingdales, Lane Bryant and more. In 2010, she launched her own brand, GLAUDI by Johana Hernandez, which helps raise funds for underprivileged children in Latin America.

Cassandra Hobbins - The Canadian-born designer is currently working and living in New York City. Her first fashion job was with Orthodox Clothing and from there she went on to hold positions with a variety of companies, including most recently, head sportswear designer for Tahari ASL. She also devotes much of her time to PROSE IV, her own line, which has been sold at American Rag, revolveclothing.com, EVA and select boutiques.

Amber Perley - Texas native Perley is the owner and designer of Pearl Southern Couture, a modern and fresh take on traditional Southern style. Her collection can be found in more than 50 boutiques, predominately in the Southeast region.

Brandon Scott - Los Angeles-based Scott serves as designer and owner to his family-run business ScottxScott Inc. ScottxScott is composed of four brands, ranging from men's sportswear to women's contemporary and shoes. The lines have been sold at Bloomingdales, Urban Outfitters, Revolve, American Rag and many more.

Daniel Silverstein - The Brooklyn-based designer is the youngest in the competition and currently serves as creative director for the "zero-waste" fashion label, 100 percent NY, which he created in 2010. An honors graduate of the renowned Fashion Institute of Technology, Silverstein has previously worked with Carmen Marc Valvo, Republic Clothing Group, Swimwear Anywhere Inc., Carolina Herrera and Victoria's Secret.

Bret Young - The self-taught, Los Angeles-based designer spent 10 years working as a Fit model before developing his own collection, Heirloom. With no formal training, he was able to observe and learn all aspects of the design business though his extensive modeling career.

JesseRay Vasquez and Garrett Gerson - The first duo to compete on "Fashion Star," these Malibu-based designers came together to form Sjobeck, a contemporary brand that epitomizes "Old Malibu Laid-back Luxury" style. Sjobeck has seen success from the top boutiques in the country, including Intermix, Ron Herman, Fred Segal, Alene Too, By George, Carolina Boutique and several others.