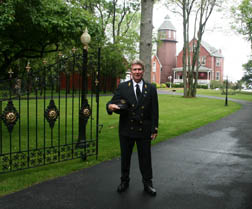 The enduringly popular daytime television game show "The Price Is Right" is set to feature Braddock Point Lighthouse in Hilton, N.Y., in a "Lighthouses Around the World" vacation getaway showcase prize early in 2013.

The 4.5 million viewers of "The Price Is Right" will learn about Braddock Point Lighthouse, one of 30 historic and replica structures found on the 518-mile-long Great Lakes Seaway Trail National Scenic Byway along the St. Lawrence River, Lake Ontario, Niagara River and Lake Erie in New York and Pennsylvania.

Owners Donald and Nandy Town operate the historic lighthouse, which was built in 1896 as a luxury bed and breakfast inn. The rooms of working light are beautifully appointed with period antiques. The showcase prize will include overnight accommodations in the Victorian-style lighthouse keeper's home.

"We are excited to be asked to participate in this special 'Price Is Right' showcase that will reach so many millions of viewers. We are never surprised at the number of people this light attracts, but the television exposure will certainly keep us tremendously busy next summer,' Nandy said.

The Towns offer a special incentive to anyone who mentions the Great Lakes Seaway Trail when making their reservation.

"The Great Lakes Seaway Trail has brought us visitors from literally around the world. The byway leads right to our door and we have welcomed people from Poland, Russia, Hawaii and all across America," said Donald, who occasionally appears in authentic lighthouse keeper uniform at the lighthouse, which is open from mid-May to mid-September.

"The Price Is Right" episode with Braddock Point Lighthouse is expected to air Jan. 15, 2013.

Braddock Point Lighthouse is actually sited at Bogus Point, three miles west of Braddock Point, west of Rochester. It is one of the few privately owned, fully functioning lighthouses in the U.S. The beacon can be seen for a distance of 13 nautical miles in clear visibility.

The Towns also own and operate Town Manor Bed & Breakfast in Central Florida.