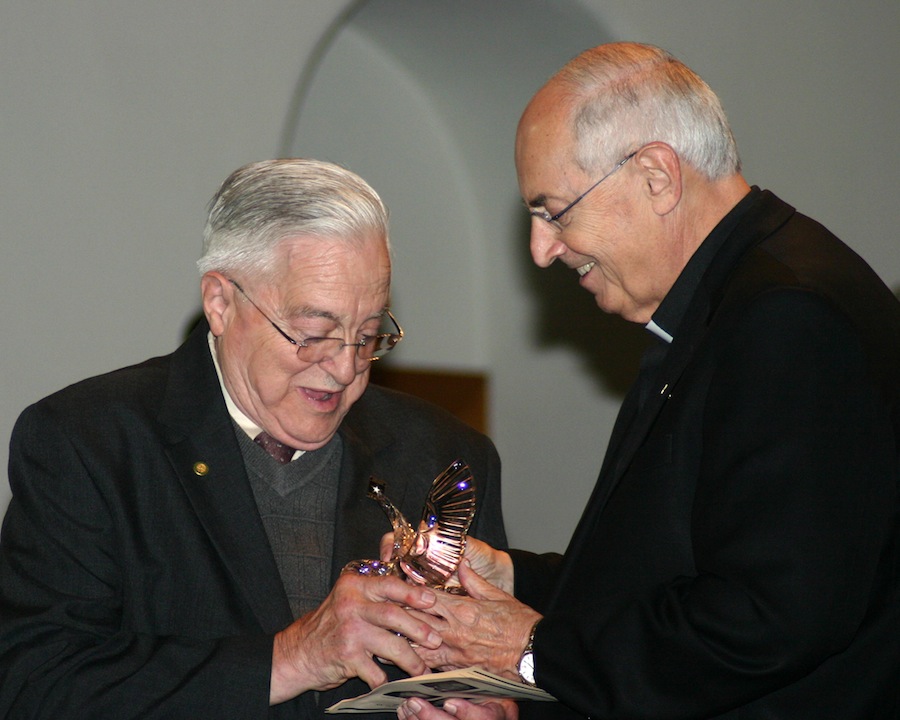 The event, which takes place during the university's celebration of Vincentian Heritage Week, recognizes the extraordinary contributions of university employees, alumni and community leaders.

Inducted into the Niagara Legacy Alumni of Distinction was Dr. Melvin B. Dyster, Class of 1948. Dyster opened his private practice in 1954 and became a pillar of the Western New York community. He started as chief of the department of family practice at Niagara Falls Memorial Medical Center in 1975, and founded the only university-affiliated physician teaching program in Niagara County. Dyster was instrumental in establishing the Hamilton B. Mizer Primary Care Center for the uninsured and needy. He also co-founded and staffed a residence for the homeless in Niagara Falls and organized a clinic for migrant workers in Niagara County. An officer in the Army Reserve for 43 years, he instituted the Niagara County Medical Reserve Corps, a volunteer group that organizes responders for civic emergencies. At Niagara University, Dyster has organized and directed the health services clinic for more than 20 years. He also sponsored development of the DePaul Hall preprofessional study center, which is named for him. Niagara has previously presented Dyster with an honorary degree (1996), a Dean's Award (2003) and the Caritas Medal (2005).

Frank Layden, '55, will also have a Niagara Legacy Alumni of Distinction plaque hung in his honor in Bisgrove Hall. After becoming coach of Niagara's men's basketball team in 1968, Layden guided Niagara to its first NCAA Tournament appearance in 1970, before accepting a position with the NBA's Atlanta Hawks in 1976. The New Orleans (later the Utah) Jazz hired Layden as general manager in 1979, and named him head coach two years later. In 1984, Layden earned awards as the NBA's Coach and Executive of the Year, and was the first non-player selected for the J. Walter Kennedy Citizenship Award. Layden finished his coaching career in 1989, but stayed on as Utah's general manager through 1998. The team averaged 55 wins per season during Layden's last 10 years with the organization and twice advanced to the NBA Finals. Off the court, Layden volunteers with numerous charities and is an ardent supporter of Niagara University Theatre.

TheRev. John Freund, C.M., received an honorary Doctor of Pedagogy for the several innovative ways that he serves the Congregation of the Mission. Ordained in 1965, Freund began as an associate professor at St. John's University in 1966. From 1967-71, he taught moral and pastoral theology at the St. Vincent de Paul Regional Seminary before returning to St. John's in 1972. Since then, he has coordinated an extensive series of national and international workshops. For the Eastern Province of the Congregation of the Mission, Freund has served as director of ongoing formation and was elected to represent the province at the International General Assembly of the Congregation of the Mission in 1998. In recent years, Freund has become increasingly involved in the use of the Internet as a tool for ministry and service of the poor. One of the most notable examples is FAMVIN, the international website of the Vincentian family. An invaluable resource to all who are inspired by St. Vincent's message, FAMVIN now reaches out to more than 2 million people in 120-plus countries.

Receiving the university's Vincentian Mission Award was Daniel M. Guariglia Jr., '75, Niagara's director of facility services. Guariglia has worked at Niagara University for almost 35 years, playing a role in the construction and/or renovation of nearly every building on campus. Guariglia can be seen at almost every Niagara sporting and social event, mindful of ensuring that all fire and safety aspects are code compliant. The safety of the university community is always top-of-mind for Guariglia, and something he takes very seriously.

John K. Spanbauer, '83, M.S.Ed.'93, another recipient of the Vincentian Mission Award, is the director of the Kiernan Center, a role he has fulfilled since the inception of Niagara's recreation complex in 1988. The son of a Niagara alumnus, Spanbauer has acted as the interim vice president for student affairs and is a key contributor to the university's crisis response team, among several other committees, during this 25-year tenure on Monteagle Ridge. Spanbauer, always generous, has given even more of himself since returning from a Vincentian mission trip to Panama last December. He has motivated students to raise money for future Vincentian mission trips and, with the assistance of his staff, adopted a disadvantaged family at Christmas and prepared meals for the soup kitchen at St. George's Church in Niagara Falls.