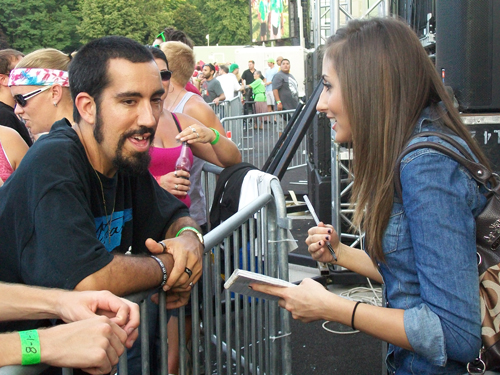 Band superfan and perennial Artpark attendee Brian Long (speaking to this writer) keeps the music in his heart by keeping his heart close to the music.

If you find yourself in front of the stage this summer at Artpark, you'll notice one person leading the legion of adoring fans. In fact, every week for the past five years, Artpark concertgoers have seen him swaying to the music, rooted so close to the stage he could almost touch the bands.

But who is he?

This mystery man is 35-year-old Brian Long of Newfane.

Long has been a steadfast Artpark groupie, attending almost all of the shows in the "Tuesday in the Park" concert series.

The question is: How does he continue to get the best seat in the house - week after week? And what draws him to the scene?

"I have a love for music - any music," Long says. It is that love for music that inspires him to get to the shows between 2:30 and 4:30 p.m. every Tuesday (ahead of the 6:30 p.m. start), and even the occasional Wednesday, to secure prime standing room.

In addition to feeling the music he so craves to immerse himself in, attending the shows also allows him to meet new people. Long says he enjoys the company he finds at the shows.

He has become a favorite of the volunteers and workers, too - even befriending some.

Artpark began charging admission fees this summer for "Tuesday in the Park." But this recent change did not deter the venue's most devoted fan.

Long has been on hand for "Tuesday in the Park" headliners Kansas, Foreigner, Huey Lewis & The News, Sublime with Rome, YES, Heart and the Steve Miller Band. He says Heart was his favorite: "I am a longtime fan."