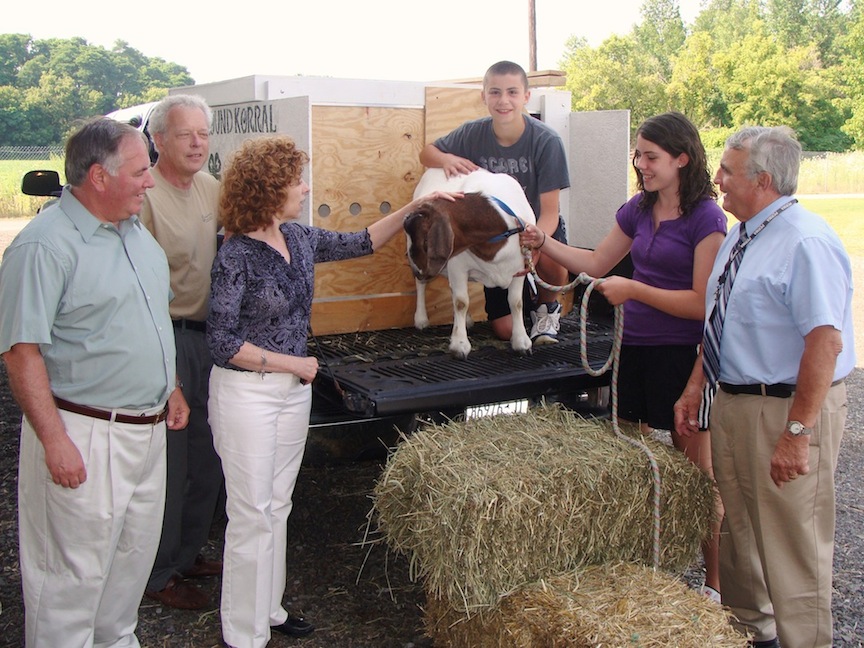 Niagara County lawmakers have long been actively engaged in issues related to agriculture and youth. In this file photo from the Niagara County Fair, Niagara County Legislature Community Services Committee Chairman Tony Nemi, I-Lockport/Pendleton, (left) and Legislature Chairman William L. Ross, C-Wheatfield, (right) visit with local youth bringing a goat to be judged at the fair and officials from Cornell Cooperative Extension of Niagara County. Nemi is among a group of seven county lawmakers opposing new Obama Administration labor rules that would bar anyone under the age of 18 from performing common farm chores.

Legislature calls on Congress to save farms from Obama labor rules

Regulations would bar kids from chores on family farms

Several Niagara County lawmakers are sounding the alarm over what they call radical new federal labor rules that would bar anyone under the age of 18 from performing many common chores on family farms, and demanding the Western New York Congressional delegation stop giving the Obama Labor Department a pass on the issue.

"Under the Obama farm rules, no one under the age of 18 would be allowed to help drive a truckload of vegetables to a farmers' market or a roadside stand," Syracuse explained after dropping off copies of his proposed resolution at the Niagara County Courthouse in Lockport. "But that's just the tip of the iceberg."

Syracuse pointed to a host of new restrictions that would prevent juveniles from doing much of anything on a farm.

"I'm quoting directly from a Department of Labor press release: The new regulations would ban anyone under the age of 18 from working in 'grain elevators, grain bins, silos, feed lots, stockyards, livestock exchanges, and livestock auctions,' " Syracuse noted. "By that standard, I'm not even sure they could participate in a number of events at the Niagara County Fair."

The regulations, drafted by Secretary of Labor Hilda Solis, also severely curtail those under the age of 18 working at any tasks at all on a farm not owned by their own parents.

"These new regulations, written by Hilda Solis - Obama's unelected labor czar - would effectively criminalize anyone under the age of 18 working on a family farm and performing common farm chores," Syracuse said. "We intend to bring our resolution to the floor Tuesday denouncing this plan, and calling on our Western New York Congressional delegation - people like Kathy Hochul - to not give the Obama Administration a pass here."

Syracuse and Hill noted the new Labor Department rules would end rural partnerships that have existed for decades, giving new powers to the federal government.

"The most obnoxious part of all is that this revokes the federal government's recognition of safety training and certification conducted by 4-H and Future Farmers of America - something they've been doing, and doing well, for decades," Syracuse said. "The new rules, instead, require farmers to attend a new, 90-hour training course run by federal employees."

Hill said he found that part particularly troubling, noting his own children are involved in 4-H.

Hill also pointed to Niagara County's role as a major agricultural producer for New York state, noting that the county ranks fourth statewide in the value of agricultural products sold directly to individuals - the very activity the new Obama rules seek to preclude youth and young adults from engaging in.

"These ridiculous new rules put incredible strain on our family farms - and, as of the last census count, we have 801 family farms here in Niagara County," Syracuse noted. "Agriculture is one of our top industries, producing more than $104 million in economic development annually."

He said this isn't the first time that federal policy originating under the Obama Administration has shown a strong anti-rural bias.

"Unfortunately, our president, who hails from Chicago, apparently doesn't understand the pressures on our small farms," Syracuse said. "Our small family farms are in jeopardy. Agriculture is far too important to Niagara County for us to stay on the sidelines here."

Syracuse said that he was confident the resolution, which calls on the Western New York Congressional delegation to vote 'yes' on H.R. 4157, the Preserving America's Family Farms Act, would pass by a wide margin in the County Legislature. He said he just hopes the county's Congressional representatives don't continue to ignore the issue.

"We hope that our congressional delegation will do the right thing in this case, and pass the Preserving America's Family Farms Act," Syracuse said. "And, if the president vetoes it, we hope they have the courage to override Obama's veto."

"Our farms - and our farm families - are just too important to be left behind here," Syracuse added.