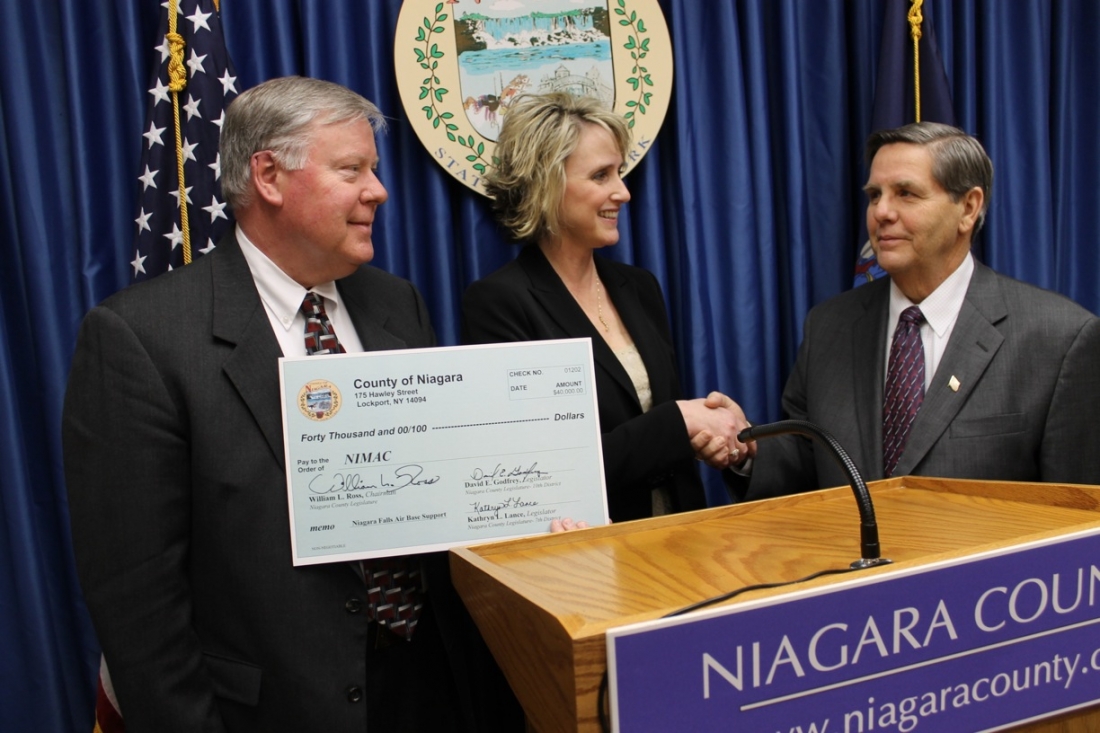 Niagara County Legislature Deputy Majority Leader Dave Godfrey (left) and Legislator Kathryn Lance present a check for $40,000 to Merrell Lane of the Niagara Military Affairs Council to fund advocacy efforts aimed at preventing closure of the Niagara Falls Air Reserve Station. The Niagara County Legislature has provided substantial funding to NIMAC and efforts to protect the Niagara Falls Air Reserve Station from federal budget-cutters since the first round of base closures in 1995.

Niagara County lawmakers reaffirmed their support for protecting the Niagara Falls Air Reserve Station from federal budget cutters, providing a $40,000 fund allocation to fund efforts to protect the base.

With 3,500 local jobs and a $168 million direct local economic impact, the Falls air base is one of Niagara County's - and indeed, Western New York's - top employers. The Niagara County Legislature has consistently and repeatedly funded efforts to protect the base dating back to the first Base Realignment and Closure Commission in 1995.

"Niagara County supports our air base," Niagara County Legislator Kathryn Lance, R-Wheatfield, said as she and Deputy Majority Leader Dave Godfrey, R-Wilson, presented organizers of the Niagara Military Affairs Council with a $40,000 check in the Niagara County Public Information Office's press briefing area. "And this Legislature is fighting to protect the 3,500 Western New York families that rely on those air base jobs."

NIMAC is a local volunteer organization that works to elevate public awareness of the base and its role in Western New York, and advocates on its behalf.

Lance, who presented the funds to NIMAC Chairman Merrell Lane, also sponsored a February resolution calling on Western New York's representatives in Congress to introduce legislation that would protect the air base from closure. That resolution noted that both Rep. Kathy Hochul and Sen. Kirsten Gillibrand serve on their respective chambers' Armed Services Committees, and as such are uniquely positioned to introduce legislation that would protect the base.

"This county government will not sit idly by during a time of defense cuts," Godfrey said. "Twice now, the Niagara Falls air base has been spared from budget cuts. That's because we've consistently fought for this base - and we'll keep fighting."