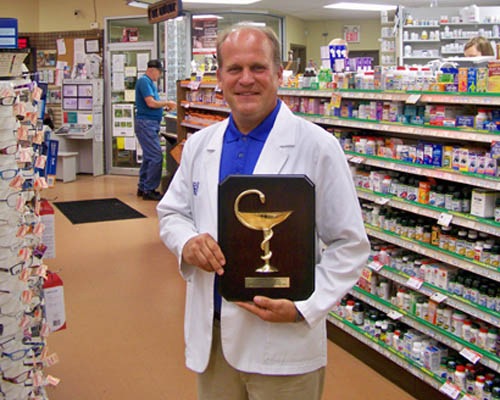 A new prescription drug law, recently signed by Gov. Andrew Cuomo, is being praised by New York's pharmacists, who say it enhances competition, fairness and public health, by giving consumers more choice in filling their prescriptions.

Among them is pharmacist Stephen Giroux of the Summit Park Pharmacy at Wheatfield and the Middleport Family Health Center, who says it allows independent pharmacies like his a fair opportunity to compete with out-of-state pharmacy benefit managers.

Giroux, who is a 2010 winner of his industry's prestigious Hygeia Award, said: "This bill levels the playing field, by increasing competition. More importantly, it allows the patient the choice of pharmacies and allows them to obtain pharmacist services in their local pharmacy, face to face, which is safer, more convenient and has proven to be less expensive. Patients can support local businesses which support their community."

The legislation had been the target of an extensive campaign by pharmacy benefit managers, who tried to label it as a "prescription tax," even though the law requires retail pharmacies to match insurance plan provisions, in terms of payments by insurers and co-pays by consumers, Giroux said.

The New York State Medical Society had urged Cuomo to sign the legislation, which was sponsored by George Maziarz in the State Senate and Carl Heastie in the State Assembly, saying it would assure that patients can continue to have a real choice in where they obtain their prescription medications.

Other supporters predict that the governor's action will resound across the country, as more and more employers, unions and governments, which buy insurance for their employees and members look for ways to control their health care costs.

The Pharmacists Society of New York Executive Director Craig Burridge said: "We know we can match their prices and beat their service. They knew it, too, which is why they (PBMs) threw-up a smokescreen of deception."