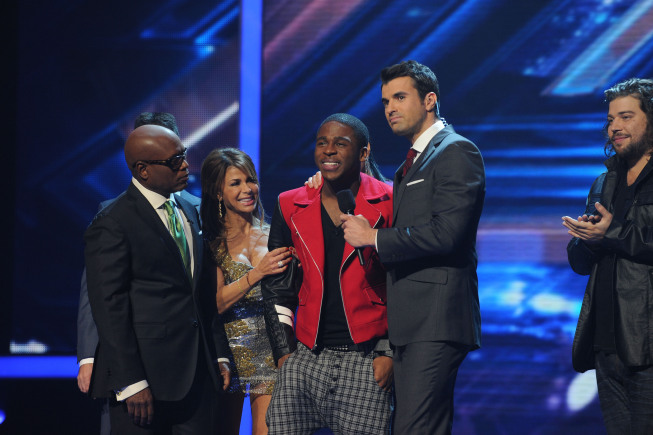 Listening to Marcus Canty, you'd never know he was eliminated from "The X Factor" (and the $5 million grand prize) - or that he had spent a full month in the bottom three.

Speaking with BTS and colleagues following his elimination Thursday from the FOX reality/singing competition, Canty was exactly what we saw on screen: positive and excited for his burgeoning music career.

"When I came into this competition, obviously I grew," he said Friday. "I needed to each and every week. Even looking back on my whole experience, I felt the growth. I saw the growth. As far as not making it to the finale, obviously the grand prize was a $5 million contract and that's where my eye was. I was dedicated to getting there. Not making it definitely didn't touch my confidence at all.

Canty and his coach, L.A. Reid, aren't quite sure why the multi-talented performer didn't latch on with voters.

"I walked into this competition and I wasn't going to feel any regrets. Anything me and L.A. did, came up ... for each live show worked to show versatility," Canty said. "It goes to show that I can be versatile. I can sing R&B music, but at the same time, I can turn around and sing a Janis Joplin song. I can take a Boy George song and make it my own. It's about being versatile and being different. Anything that me and L.A. did, it had nothing to do with that. America's out there voting. The fortunate part is that I feel like America chose who they wanted to be in, and I'm definitely happy for any decision that was made. But me and L.A. are cool."

Despite his three straight trips to the "save me" sing-off, Canty was generally well received by Reid and fellow judges Simon Cowell, Paula Abdul and Nicole Scherzinger.

"It felt good that a lot of the people in the industry (supported me) - especially Paula, she was so, so nice to me each and every week," Canty said. "Even behind the scenes she was so nice to me. Nicole as well. Funny enough, Simon is actually - Simon's a puppy dog. He's pretty nice himself. I have nothing but great things to say about the judges. They're amazing and I hope to work with them in the future."

Interestingly enough, at the beginning of the competition, it wasn't the four-person panel Canty sought to impress. Rather, it was his mother, who had given Canty a two-year window to "make it or break it" in the music industry. The singer was at the end of his allotted time when he auditioned for "The X Factor."

With his recent success, "my mom definitely gave me that extension that I needed," Canty said. "I think 'The X Factor' was the platform that maybe she was looking for. She gave me the two years because, before the competition, I may have gotten a little lazy about my career. Everything that happened for me, my mom did for me, so I never had to work for much. But this competition matured me and turned me into the working man that I needed to be.

"Especially fighting each week, being in the bottom so many times, I had to keep fighting. Doing that and seeing how many people love me and support me, it made me more motivated. It makes you want to work even harder each and every week, even after the competition. I won't give up on my dream."

Visit www.TheXFactorUSA.com for up-to-the-minute news, videos and information. Become a fan of "The X Factor" on Facebook at www.facebook.com/TheXFactorUSA. Follow the series on Twitter @TheXFactorUSA and join the discussion at #XFactor. Also, follow the judges: @SimonCowell;@PaulaAbdul;@LA_Reid; and @NicoleScherzy.