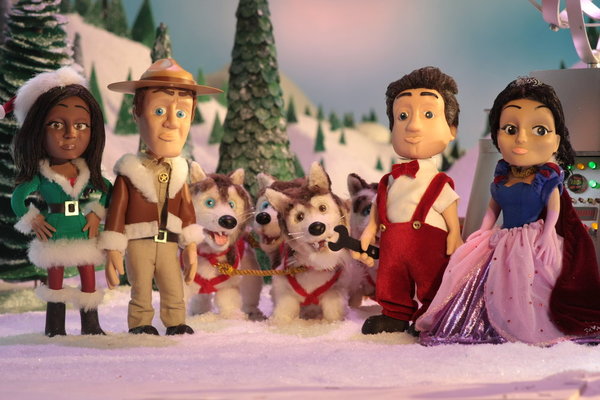 The cast of "Eureka" gets a little animated for Christmas. (Syfy photo)

It's a merry Christmas for fans of 'Eureka,' 'Warehouse 13' and 'Haven'

A holiday tradition continues Tuesday on Syfy with new Christmas episodes of "Eureka" and "Warehouse 13."

Joining those shows under the mistletoe this year is "Haven," with a "Christmas in July"-themed episode.

With so many different types of Christmas programming this time of year, the Syfy stars were asked to share a little bit about what each looks for in a holiday special.

"Well, for me, anything that's good," "Eureka" star Colin Ferguson said. "I mean, I'll go dark or light or happy or sad as long as it sort of has integrity in and of itself and works as a piece. I mean I love the 'Grinch' stuff and all the classics that you sort of see once every year, and they bring you back to when you were a kid.

"But I think anything - myself, anything with a moral compass and integrity"

"Yes, I mean, I usually fall to kind of the old classics that are - you know, signify like Christmas tradition," said "Haven" star Emily Rose. "For me, sitting down and watching 'Rudolph' and the 'Grinch,' and all of those, all the classics.

"But I think for me it's really about if I want to sit with the characters again, and if I've been missing them for a while and I want to like fit into that place again than I will definitely tune into that."

"You know, it's a tradition because the television networks have created it and starting back as far as I can remember," he said.

"And it's a tradition at my house, because we can put the kids in front of the TV and the adults can have some quiet time. I suppose that's what my parents did with me," he added. "When I was growing up, you couldn't just dial up a Christmas show on iTunes or watch it on your phone, or you know, you actually had to wait an entire year to see those shows again. So it was exciting; it was like, 'Wow, I remember this from last year.' You know, I mean, my kids watch 'Rudolph the Red Nosed Reindeer' now like once a month. So it's just like, you know, hopefully the tradition will be able to stand up in the face of all this new technology."

In "Eureka," Jack and Jo find themselves lost on their way to the photon generator and appear to run into the nature-loving Taggart, who has transformed into a polar bear living in an ice cave. Hospitable Taggart quickly offers penguin tartar when, not before long, Jack gets nauseated at the sight and runs off looking for Andy. Tune-in Tuesday, Dec. 6, at 8 p.m., as Eureka gets an animated makeover for this special holiday-themed episode.

In the "Warehouse 13" sneak peek, Pete is seen reaching high on the shelves to put back Rudolph's nose, when suddenly he falls on the slippery snow on the ground, taking down several other pieces with him. He returns these items back onto the shelf and heads back inside. Upon entering he notices two investigators who quickly ask him to show his hands. Taking it as a prank from Artie, Pete tells him to come out, but instead we see MacPherson appear and claim Pete hasn't worked there for years. Tune-in to an all-new episode of "Warehouse 13" on Tuesday, Dec. 6, at 9 p.m. to see if MacPherson really came back from the dead!

In "Haven," Audrey is wondering why everyone seems to think it's Christmas Eve and is confused by the Santa locked up in the cell block. Santa asks Audrey if she'd like to sit on his lap, which sparks a nerve and Audrey goes after him, but soon realizes that it's Duke under the costume. It appears that Nathan and team were helping to get Audrey into the holiday spirit - though she's still unsure why, considering it's July! Haven returns for its first holiday episode on Tuesday, Dec. 6, at 10 p.m.