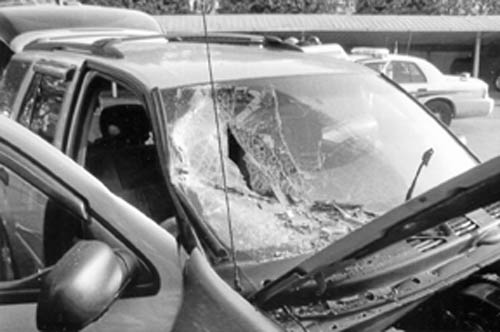 A car suffered severe windshield damage after a collision with a building on Sunday.

At 5:23 p.m. on Sunday, Oct. 9, Grand Island firefighters and medics responded to an incident of a car colliding with a structure at 2095 Town Hall Terrace.

Grand Island Fire Co. Chief Kevin Koch reported that all occupants of the vehicle safely exited prior to arrival of rescue personnel. The driver, 64-year-old Lawrence Neal of Buffalo, reportedly lost control of the auto when his foot slipped off the brake pedal. The ensuing crash sheared off a large support post for a second floor balcony, but there was no collapse involved. Neal and a passenger, 38-year-old Eddie Fields, of the address in question, were evaluated by GIFC medics, but claimed no injuries.

After building maintenance was notified to make emergency repairs, GIFC units returned to service at 5:44 p.m. according to Koch.