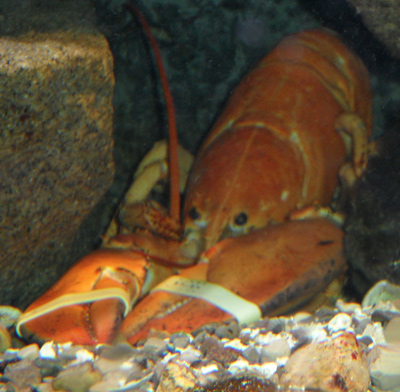 Yellow lobster at Aquarium of Niagara

Déjà vu! Almost a year ago, the Aquarium of Niagara was presented with a rare yellow lobster. Such a specimen happens in one out of 30 million lobsters.

At the end of July, a second yellow lobster, was discovered in a shipment of lobsters headed for Wegmans seafood section in Pittsford. But, Mark Fromm, seafood manager at the Pittsford store, had heard about the Aquarium of Niagara accepting a yellow lobster last year from Palmer Food Services in Rochester, so he emailed AON Executive Director Nancy A. Chapin.

Did the AON want another yellow lobster? Sure, said Chapin, you can never have too many yellow lobsters. So now the AON has two, both on display on the first floor. Lobster No. 2 is now hanging out in the living museum's "Intertidal Zone" on the first level. Old Yellow is in the nearby "Layers of Life" exhibit.

Considered an "incredible specimen," the smaller new lobster is actually more on the orange-ish side. He seems to be well-adjusted to his new home. Little does he know how close he came to being lobster bisque. He doesn't have a name yet, but maybe he should just be called "Lucky"?