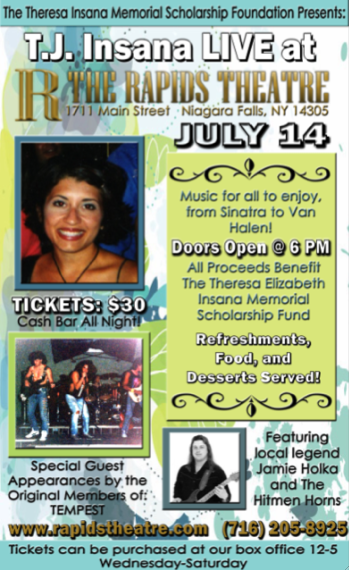 T.J. Insana and Niagara Falls' own Tempest will reunite for one night only to celebrate Theresa Insana's life and to better the lives of two college-bound Niagara Falls High School students.

The "For Theresa" benefit concert will take place at 7 p.m. Thursday, July 14, at The Rapids Theatre, 1711 Main St., Niagara Falls. Tickets are $30. Funds will go toward the memorial foundation established in memory of Theresa, a 1996 Niagara Falls High School graduate who was murdered in 2004 at the age of 26.

For the show's first two sets, Insana (Theresa's cousin) will perform with celebrated Western New York guitarist Jamie Holka and all-star musical group The Hitman Horns. He and Tempest members Todd Ricotta (bass), Marc Ricotta (drums) and Paul Zuiko (guitar) will perform together for the first time since 1989 during the third and final set.

During intermission, one NFHS senior girl will be awarded a $1,000 scholarship, and a second will take home a $500 scholarship. Additionally, refreshments will be available throughout the evening.

Theresa, a native of Niagara Falls, was living in Summerlin, Nev., a suburb of Las Vegas, at the time of her death. She was employed as a sales executive at the Rio All-Suite Hotel & Casino.

When she failed to show up for work on Oct. 26, 2004, her coworkers became suspicious.

The police were notified, as were her parents, Joe and Ann-Marie Insana of Niagara Falls. They quickly flew to Nevada in the hopes of finding their daughter, who was officially declared missing a few days later.

When they arrived, they discovered Theresa's home in order - car keys, wallet and dog all intact - and her car still in the driveway.

A massive search was conducted over the next week, and Theresa's story was reported on national news channels and websites, including Fox News. Local media in Niagara Falls and Las Vegas also lent support in trying to find the missing woman.

A murder investigation is ongoing.

"The cops here in Vegas have worked incredibly hard on this for a long time. They are, to say the least, a little frustrated. And they are, really, one break away from closing this. And maybe we can help them get that break," said "Dateline" host Josh Mankiewicz.

"I could never let the memory of Theresa leave us," Joe Insana says of his daughter, a State University of New York at Binghamton alumna. "Theresa loved life, had passion for many causes, and was always there for others."

Joe and Ann-Marie Insana are grateful for the community's support.

"I'm very touched," Ann-Marie says. "All the kindness of friends, neighbors, family. People will stop you on the streets and ask how you are."

Adds Joe, "The overwhelming support of our community is very heartwarming."

"I never realized how many people really care," he says. "They give us the support to continue this scholarship for future years. The idea of helping a freshman in college gives us a feeling of something really good being done, and moving forward in a very positive way."

The venue is online at www.rapidstheatre.com.

If you have any information about the case of Theresa Insana, featured in the "Dateline" report "Lost in Sin City" from Friday, June 17, please contact the Las Vegas Metropolitan Police Department at the following: