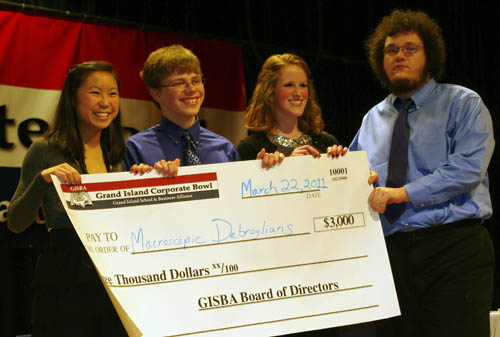 Macroscopic DeBroglians with the winning check.

Story and photos by Larry Austin

A last-minute decision to put a Corporate Bowl team together turned into a $3,000 profit for four Grand Island High School students.

Rustowicz and Gibney, who both were a part of a recent St. Stephen's Parish Players musical production, made a spur-of-the-moment decision to enter the quiz bowl competition.

"We were at "Grease" rehearsal and we decided to make a team one day," Rustowicz said. "That's where it all started."

"We recruited Ben in psych, and Ben thought of John," she said. "We kind of put ourselves together last-minute."

Macroscopic DeBroglians had a 60-point lead over Chester's Tree Jumpers after the first grab bag round. The individual round saw all 12 students on the three teams correctly answer their questions in social studies, science, math, and English language arts.

Turner was on fire in the final round of the championship match, answering 13 questions correctly for 20 points each, including eight of the first nine questions, to remove all doubt about the outcome.

Macroscopic DeBroglians finished with 480 points, to Chester's Tree Jumpers' 140 points, and The Gray Matters' 90 points. The Tree Jumpers and Gray Matters were no slouches, having both scored more than 400 points in their decisive victories in the semifinal matches earlier in the night.

"It feels wonderful," Gibney said after winning. "I am very excited. I wasn't expecting to win, so this is a really pleasant surprise, and I'm so proud of my teammates."

"They did an amazing job, and I couldn't have been more proud of them," she said.

"We really lucked out to get all the history questions," Rustowicz said, calling the team a group of avid readers.

Twenty-seven teams began competition on March 15, with nine teams advancing to the semifinals after a preliminary round. The cheerleader, two chess club members and mega-peppy sophomore were considered underdogs to take down the top prize, team members said. Rustowicz and Gibney admitted that they knew a lot of people in their school who were rooting against their team and doubting its chances.

"Which really just fueled our fire," Gibney said. "We wanted to show them."

"There were a lot of people that said they didn't think we would do it, and each time we proved them wrong, so it's exciting and we're really happy to win," Rustowicz said.

The Ninjas - composed of Allie Frandsen, Diana Boulden, Nils Wernecke and Emily Dauphin - nearly derailed the Macroscopic DeBroglians in the semifinals, taking a 110 to 100 lead heading into the final grab bag round, before the eventual winners rebounded for a 50-point win.

Results of the three semifinal rounds and the championship match, including winners and the match scores.

Semifinal match 2 - Chester's Tree Jumpers (450 points) were victorious over One Team To Rule Them All (170 points) and Team Carlos (85 points).

Semifinal match 3 - Macroscopic DeBroglians (260 points) were victorious over The Ninjas (210 points) and The Brits (65 points).