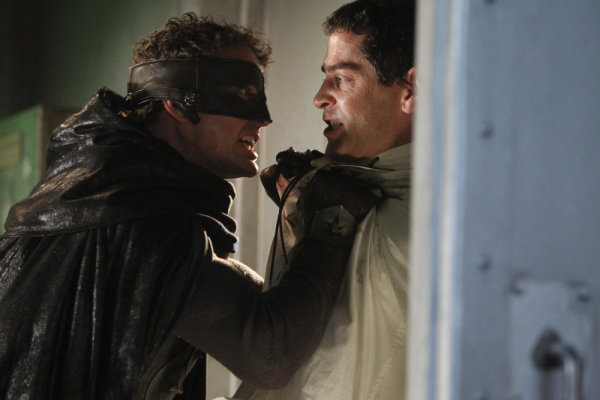 Pictured from "The Cape" are stars David Lyons as Vince Faraday/The Cape (left), and James Frain as Peter Fleming/Chess (photo by Jordan Althaus/NBC)

'The Cape' continues quest for justice

Fans of NBC's new superhero skein "The Cape" know framed police officer Vince Faraday is bound and determined to clear his name and reunite with his family. While it's unlikely the former will happen anytime soon, star David Lyons says the latter is possible.

"There is - well, I don't want to give too much away, but there is - I mean, in this situation, what we're seeing with the journey of Vince Faraday is one man who's fighting to get his family back and to clear his name, in doing so realizing the importance that his role is becoming in an environment that is becoming increasingly more corrupt," Lyons says. "So there is that pull towards family, and then there is this other pull, which is dragging him from society away from his family.

"And I can tell you that he does come into communication with his family on certain levels. And I can't give too much away, but we will see the cracks in his obsession to appear and trying to figure out how to juggle these two things - these two burning wants that he wants."

And what he wants, besides his family back, is to clear Palm City of the evil Chess - aka defense contractor turned Marshall lawman Peter Fleming (James Frain) and underworld heavies such as Scales (Vinnie Jones).

"As we get the scripts, the world opens up so vastly that one man's obsession - Vince Faraday's obsession with Chess and Peter Fleming and (to) bring that man to justice is circumvented somewhat by other scenarios," Lyons says. "There's the rise of Scales, there is the ensuing violence that takes hold of Palm City. ... There's a lot of frustration in the way Vince approaches it, which kind of bleeds out in his relationships with other people. I mean, he's an obsessive man that's kind of - as we grow through the episodes, that each week that we see him doing something that is not directly family-related or getting back on track to getting his family, he becomes more and more - I suppose more and more curtailed by circumstance, which is - bleeds into that frustration that he feels as a character."

At the heart of the show, Lyons says, is "the everyman that's fighting back; one guy against the corruption and the evil of a multinational corporation whose - the face of which is Peter Fleming. And I guess in terms of the modern world, the symbology is fairly rich in those terms.

"He was a family man with everything taken away from him, and in an archetypal David-and-Goliath-type struggle."

While Vince Faraday may spend his nights as The Cape, a masked, cloak-throwing vigilante in the mold of Batman, Lyons says, "The way I approached the script was the same way I approached the character - was not in terms of being a superhero. It was in terms of being a family man that's torn away from everything that he loves and he's using this last vestige of hope in order to get it all back."

Of course, The Cape, himself, is a symbol of hope for those in Palm City. And in taking on the role of a comic book superhero, Lyons has no doubt opened the door for future employment in the action/adventure and sci-fi realms. But the actor says he's too busy filming "The Cape" to think about that right now.

"Well, it's been interesting, because I'm still very much hard at work," he says. "So for 14 hours a day, I'm still on set. So I haven't really managed to get out there and see what the reaction is.

"But in terms of friends and so on, I mean, it's a very, very different role from anything else I've ever played. It's a much more physical, much more angry and obsessive role than anything I've ever played, so it's been really interesting in that. And then what we're doing now or what I'm - that is coming through in the character, Vince, is a lighter side, and so trying to combine those two - the man and the obsession.

"But in terms of the response and so on, it won't be until my head comes - surfaces from beneath the water in March that I'll really know what, if any, the effect has been."

"The Cape" airs Mondays at 9 p.m. on NBC. For more information, visit http://www.nbc.com/the-cape/.