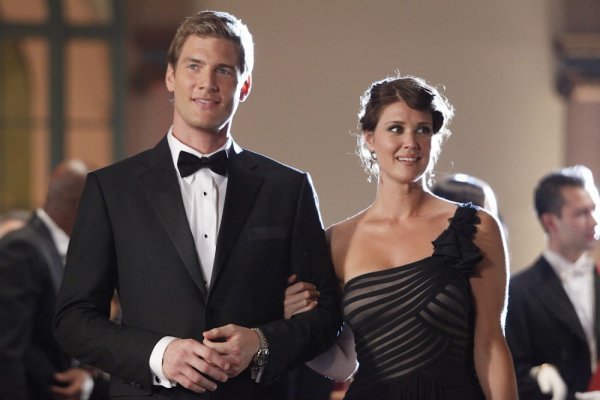 For as much as "Awesome" and Ellie enjoy the occasional spy v. spy action, at the end of the day, they're just not cut out for the CIA life.

"You know, it's interesting. I think sometimes if I was to let my ego get in the equation, it would be like, ‘Yes. I want a gun. I want to fight. I want to do this. I want to do that,' " Lancaster tells BTS. "But when I look for, you know, the show as a whole package and what would be best for the storyline as a whole, I think that you have to have the dichotomy of Chuck's spy world and Chuck's home world. And, I think that the Ellie character is best suited to not know and not to participate in that stuff.

"I think our writers agree with me."

McPartlin looks at it this way: "The reason that you know, we have the sitcoms about the same themes, you know, like ‘Everybody Loves Raymond,' or -- about the home life over and over again is because there is enough drama at home," he says. "If it's written well and done right, then there can be enough relatable, dramatic moments in the home life that can create some good situational comedy. And, I think that's kind of our purpose.

"And as much -- like Sarah said -- as much fun as it is to get out there and try and grab a gun or do whatever, shoot some missiles from cars and save the day, I think the real moments that the audience relates to comes because Chuck has us at home and has a real life to go back to. And without that we would just become the ‘A-Team.' "

Indeed, since the premiere of "Chuck" in 2008, the number of spies in the field has jumped considerably, and now includes both Chuck and his best friend and "Buy More" co-worker, Morgan Grimes (Joshua Gomez).

"(We have) great writers. They could flip it and turn it around, and I'd be -- you know, I'd be like a kid in school again," she said. "I'd be happy to wield a gun and try shooting somebody, you know. But, I do think even though some of the moments are few and far between, I really look forward to those moments that I have with Zach, where it kind of -- it brings the show to a different -- it takes it down a notch. It grounds it a little bit. And, I think it's important, and I think that the show would be lacking something if those moments weren't there."