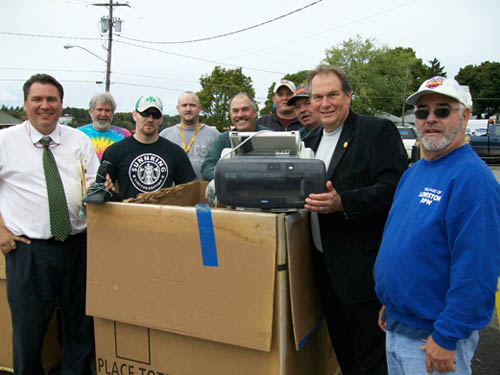 Left of Center: Inkjets fly away!

"That's amazing," Richard Pope said as he looked over the statistics from Saturday's electronics recycling day in the Village of Lewiston. The director of Niagara County's Refuse Disposal District revealed 263 residents participated in the one-day event at Lewiston Landing, dropping off an estimated 20,000 pounds of computer printers, monitors, keyboards, televisions and wireless devices.

"We had quite a bit -- much more than last year," Pope said.

He's not kidding, either. The Refuse District, working in cooperation with the village and its Department of Public Works, collected enough electronics materials to fill two tractor-trailers, which is one full truck more than last year.

"We're very encouraged by the residents in the Lewiston area, and how they support the Niagara County Refuse Disposal District and its programs, and have a keen knowledge of recycling," Pope said.

To that end, Pope and Niagara County Legislator John Ceretto (chairman of the Refuse Disposal District) are looking to install a permanent electronics recycling location in Lewiston. Pope said such an entity would be open to all county residents.

In the meantime, electronic devices such as the ones listed above can be recycled at the Niagara County Landfill and Recycling Facility at the Route 93 bypass in Lockport. For more information, call 434-6568 or visit http://www.niagaracounty.com/landfill/.